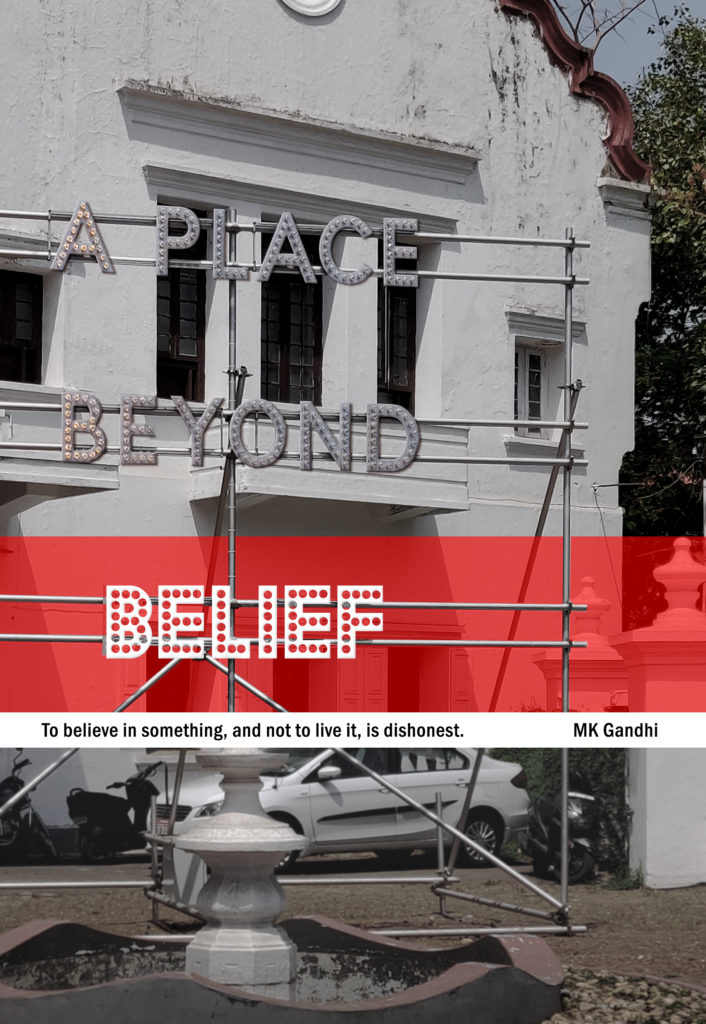 Stand for Something or Fall for Anything?

The 2019 Indian general elections are just round the corner. Before the next quarter of Inter-Actions reaches you, our 17th Lok Sabha will be constituted. And, the burning question in these summer months echoes the evergreen rapper Tupac Shakur’s lines:

We have chosen the flavour of this time as our current theme: Belief. The cover shows a photograph of Nathan Coley’s work ‘A Place Beyond Belief’, which was featured at the 4th Kochi Muziris Biennale curated by Anita Dube. In an interview with us for this issue, Anita talks about “that place which is beyond belief, which is culture and art.” She holds that you don’t need belief if your work can give you pleasure, and it can provoke you to think. It is a double-edged statement, pointing, on the one hand, to the fact that belief and its myriad establishments could become redundant if our work is in place, and on the other, to the necessity and possibility of connecting pleasure and thought in our daily enterprise of living.

At this poll time, when we are asked to believe in umpteen promises and manifestoes, perhaps we could ask that one little question: is our work in place—does it make us happy, and does it make us think? Or, are we allowing third parties to relegate us to the wretched peripheries of our nation? Are we letting anyone invade our rightful space to work merrily, and yet reflectively? Eminent social psychologist Ashis Nandy in a candid interview with Inter-Actions in this quarter says: “So, there is this governmentalization of public spaces, and of public consciousness. Underlying the lack of resistance to these is perhaps a belief that some things belong to the state: This is the state’s work to do. This is much beyond us.”

As citizens of the largest democracy in the world, we must be wary of our own reluctance to put our work into place in the direction of moulding our thoughts and living our happiness. At this juncture of reexamination of our responsibility as free-thinking citizens and human beings, it might be rewarding to go back to the world of art and culture which promises to offer us “a place beyond belief” and see how this is possible.

However, the controversies that emerged from the very space of Kochi Muziris Biennale 2018-19 is indicative of the way our cultural spaces squander radical opportunities. While Anita Dube’s sensitive curatorial work has fetched accolades from all parts of the world, the KMB as an organisation has been weighed down by the #MeToo allegations as well as mismanaged administration. The now-apparent divide between the content and carrier of the KMB point to the critical need for deep and holistic reflections in the world of art and culture. The question is if the arts today can genuinely concern themselves with contemporary and humanitarian issues beyond the construction of spectacles and events. If the art world that must offer its fearless voice to the voiceless and the downtrodden itself becomes an exploitative power that does not even acknowledge the workers who put up the show, the work becomes ‘a hollow show of democracy’ and not a true place of happiness.

Where does one find such a place, and what does it take to build such an equitable community? In an effort to figure this out, our LILAIGHT of the Season, explores the dream and realization of Auroville, the universal city and experimental community in Puducherry dedicated to the idea of human unity. And our Basic Conversations critically examine various belief systems that tend to lead us to unprecedented religious polarisation and prevent the world today from claiming its happiness. Our exploration reveals the alarming ways in which unexamined beliefs can engender terror in our world today.

The way out of this conundrum of insecurity, polarization and power politics, perhaps, is to understand and discuss issues in a middle space of love and freedom. During this election season, if we delay our reclamation of this trans-space of conversations and possibilities by standing up in courage, we might just fall for anything. And, loveless worlds are always ruled by fear, as transgender writer A Revathi indicates: “Our society is quite complicated with rigid structures, and it imagines that love should happen only between male and female, and within castes and sub-castes. So naturally people feel insecure within this society.” She posits awareness and education as necessary tools to surmount our dilemma. And, it is significant to see how those very tools have helped Liza Edwards, the soon-to-be Rabbi Emerita of the world’s first LGBTQ+ synagogue, too initiate a radical wave of thinking in her community as her insightful interview here reveals.

As we talk about a conservative establishment accommodating change, it is worth juxtaposing that movement with what is happening in our centres of learning. The way educational institutions in this country function today is indeed beyond belief. Even as the JNU administration continues its undemocratic policies, the Vice Chancellor of Central University of Kerala issues a circular and asks the departments to “discourage research in irrelevant areas” and to make a shelf of PhD projects “in accordance with the national priorities” from which the students might choose their topics. It throws us back in time to a convocation speech delivered by Jawaharlal Nehru on 13 December 1947 at the University of Allahabad, which warned us thus: “If the temple of learning itself becomes a home of narrow bigotry and petty objectives, how then will a nation prosper, or a people grow in stature?”

That question claims remarkable resonances in today’s India, as we prepare to elect our next government to power. And, Leelatoonist Unny sums up our concerns during this quarter through the spectacular visual of a traffic island scene that focusses on the one person whose senses, signals as well as purpose are in place. The one individual who believes in bringing some order to the things around, stands for something, and does not tend to fall for just about anything—can we as a people develop the sense and sensibility of the traffic policeman managing the chaos of an Indian junction?

On the proverbial Fools’ Day, we bring all our readers to that outlandish site, and wish those in India a very happy and thoughtful voting! After all, the Bard’s Fool was the wisest of them all!

Auroville, a universal city and an experimental community in Puducherry lilaights us with the ideal of human unity.

Transcending Consciousness and Embracing the Divine

Auroville : Evolution of an Organic Community

Contextualising the Qur’an: A Translator’s Imperative

Terrorism: The Dark Side To Group Love

Finding Reason in Religion: A Conversation with Swami Agnivesh

“Why Don’t You Get Married Already?” 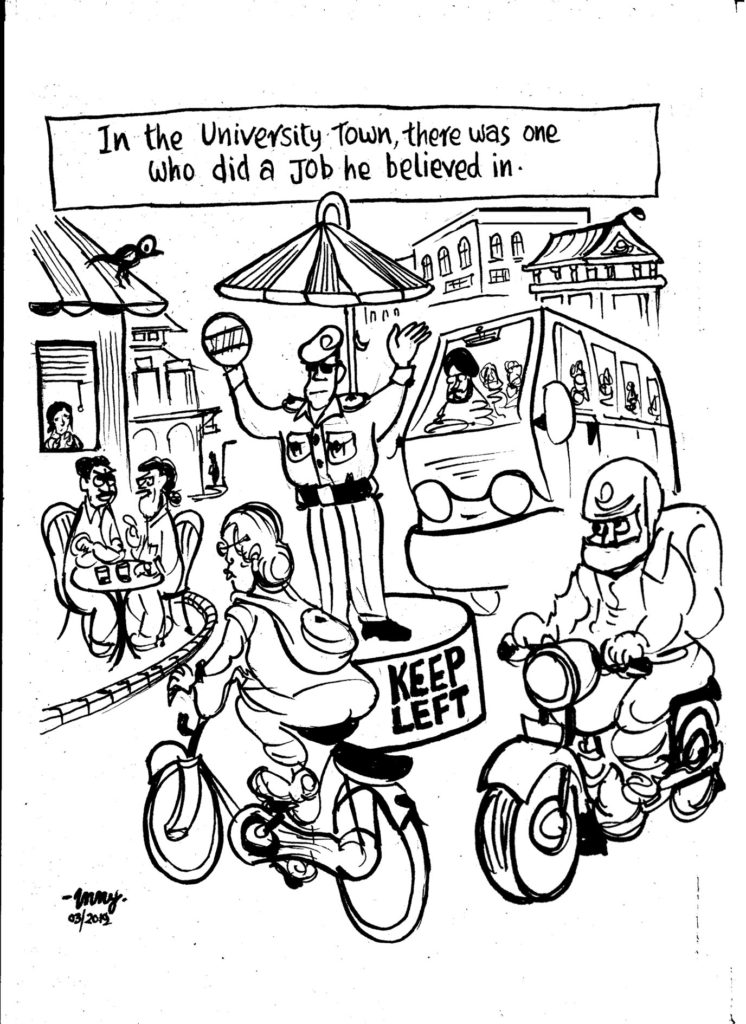 Everyone Has a Seat At The Table

From Medieval to Modern: A Short History of Belief

How To Effectively Talk About Climate Change

The Path to Sustainable Health

The Fading Foundations of Journalism

Curating ‘A Place Beyond Belief’

Faith Must Be Rooted in Doubt

Change Without Knowledge Is Not Progress

An Art Not Yet Established

A transfeminine writer and activist, A. Revathi is furthering the gender discourse on behalf of all gender and sexual minorities

Transgender Is Not Just One Gender

The nuances of Intersex, Transmen, the uneducated queer labour community and gay and lesbian rights need to be discussed for a proper queer movement in India

Kugali: The Art of Shaping Beliefs

Kugali talks to Inter-Actions about catalysing the (re)discovery of forgotten African stories by recasting folklore into accessible comics.

Kugali: The African Anthology of Survival and Hope

Kugali’s African Comic Anthology has brought a renewed interest in comics for all ages. Read more to find out

Drag It Out: Deconstructing Masculinity In Style

Faith Healing: The Experience of A Non/Believer